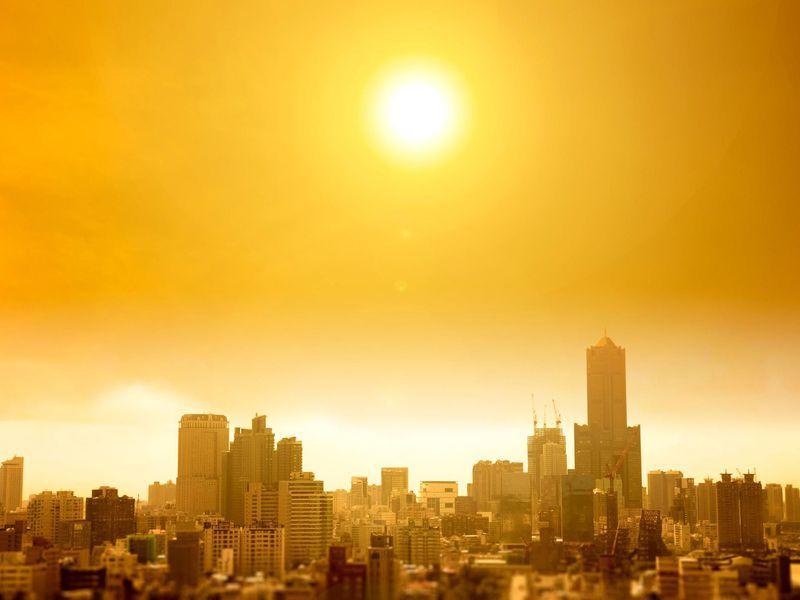 The coating, if used on enough buildings at once, could also help deal with so-called “urban heat islands.” (Tomwang112/iStock)

As temperatures soar worldwide, how do we keep our homes and other buildings cool? The wealthier among us blast our air conditioning, which is effective, but only further harms the environment, thanks to higher energy usage. The less fortunate simply suffer, or even die in heat waves.

Researchers from Columbia University have a novel solution for cooling buildings, one they say could help reduce the burden of climate change. It’s a white paint – technically a polymer coating – that uses infinitesimally tiny holes to cool the air.

The coating is an example of passive daytime radiative cooling (PDRC), wherein a surface cools down by reflecting sunlight and heat back to the atmosphere. White paints, which reflect light, has long been used for PDRC. But they usually contain pigments that absorb light, and they reflect longer solar wavelengths imperfectly.

In contrast, the coating developed by the Columbia team has a foam-like surface full of nanoscale holes. To create it, the researchers basically took the pigment from white paint and replaced it with these tiny holes. This turns the normally transparent polymer white. The holes scatter and reflect all wavelengths of sunlight, making the coating far better at PDRC than traditional paint.

“[Traditional white paints] typically reflect only 85 percent of total sunlight, but absorb the rest and heat up,” says Nanfang Yu, a professor of applied physics who worked on the research published today in the journal Science. “In contrast, the coating we developed reflects 96 to 99 percent of total sunlight – ultraviolet, visible and infrared – which is remarkably high, and can remain below ambient temperatures even when sunlight is strong.”

Other scientists have used similar solar-reflecting methods to achieve cooling, says Mark Swihart, a professor of chemical and biological engineering at the University at Buffalo, who was not involved in the research.

“However, what is new here is the relatively simple and clever means of achieving the result,” he says. “As best I can tell, nobody has previously proposed using such porous polymers for this passive cooling application. The novelty of the work lies in the selection of this very simple method for forming films that achieve the passive cooling effect.”

Because the method is so simple, Swihart says, it could be relatively easy and cheap to produce and apply on a large scale – the coating could, for example, be manufactured in large rolls and applied like wallpaper.

“I think it may have significant practical potential,” he says.

The coating is easy to apply, essentially working like a standard paint. It can be used on almost any surface, from rooftops to water tanks to vehicles. The team also experimented with making the coating in different colors, in the hopes of making the product appeal to a wider audience. Adding color does lower the degree of cooling, but the performance is still better than colored commercial paint.

“This is important in view of human tastes,” says Jyotirmoy Mandal, a doctoral student and lead author on the study. “Not everyone wants a white roof on their house, and paint companies have been trying to develop ‘cool colors’ for decades.”

The researchers are now focusing on using water or alcohol-based systems to make coatings with similar cooling performances, which could make the product more eco-friendly and easy to apply. They’re also looking at new ways to recycle discarded polymers.

The team hopes the coating could eventually be used in places from deserts to tropical regions to places with intermediate climates – essentially anywhere where heat is more of a problem than cold. It could also be useful in a wide variety of economic situations.

“In resource rich settings, the coating can reduce air-conditioning costs,” says Yuan Yang, a professor of materials science and engineering who worked on the research. “In resource-poor settings, where electrical cooling is unaffordable or unavailable – for example in rural South Asia or Africa – the sub-ambient cooling can give relief.”

The coating, if used on enough buildings at once, could also help deal with so-called “urban heat islands” – urban areas that get much hotter than their surroundings, thanks to close-together buildings and lots of human activity. As the world continues to urbanize, these heat islands are an increasing problem – heat waves kill a disproportionate number of city-dwellers.

“Such an effort, however, requires a wide collaboration between researchers, urban planners and policy makers,” Mandal says. “We hope that our work will spread awareness about the potential of radiative cooling outside scientific circles.”

Emily Matchar is a writer based in Hong Kong and Chapel Hill, North Carolina. Her work has appeared in The New York Times, The Atlantic, The New Republic, The Washington Post and other publications. She is the author of Homeward Bound: Why Women Are Embracing the New Domesticity.