Flower-Like Wave Energy Turbines Could Power the Coasts of Japan 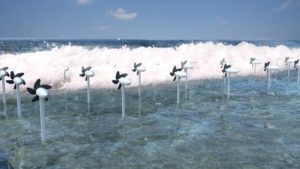 Along Japan’s coasts are structures called tetrapods. These pyramid-shaped concrete wave breakers serve to reduce the strength of crashing waves to prevent erosion in key spots along the shoreline. Researchers at Okinawa Institute of Science and Technology Graduate University (OIST) have created a technology that, like the tetrapods, helps protect the shoreline, but also generates power from waves while its at it.

The researchers designed wave energy turbines that resemble flowers growing from the seabed with petal-like blades that spin. The submerged turbines would be placed in areas where tetrapods are used, namely the southern parts of Japan, and would be anchored to the ocean floor. The turbines also feature a flexible stem and blades that can endure the pounding of crashing waves.

The flexible and softer materials of the stem and blades also makes them safe for any marine life or birds that may come in contact with them.

The potential for wave energy generation in Japan is huge and this technology could potentially harvest a lot of energy without having to place the turbines everywhere.

“Using just 1% of the seashore of mainland Japan can [generate] about 10 gigawats [of energy], which is equivalent to 10 nuclear power plants,” Professor Tsumoru Shintake of OIST explains. “That’s huge.”

The turbines will have a lifespan of 10 years and maintenance for the generators could be coupled with tetrapod maintenance. The team is now working on two smaller scale models of the turbines to test and demonstrate their effectiveness in powering LED lighting.