Matter of Trust is the fiscal sponsor for an Andersen Lab project that aims to find out. Led by Dr. Gary Andersen, Microbial Ecology Department Head, Senior Scientist Lawrence Berkeley National Laboratory, Adjunct Professor UC Berkeley Department of Environmental Science, Policy and Management, the project is funded by the San Francisco Department of the Environment.

Below, Dr Andersen explains the project in more detail.

After an initial successful trial of examining the extent for breakdown of two defined compounds, ibuprofen and ciprofloxacin, we have concentrated on increasing the accuracy of the chemical detection methods to identify very low levels of these pharmaceuticals in a chemically complex background of the compost. For this work our goal has been to detect the pharmaceuticals and their breakdown products in compost samples over a period of time, typically weeks. Before we start the next round of spiking defined concentrations of pharmaceuticals, such as ibuprofen and ciprofloxacin, into the starting compost material we have been focusing on the development of rigorous calibration standards to more accurately measure microbial-specific degradation through bacterial secondary metabolism. We have been injecting stock solutions of pharmaceuticals into compost, and optimizing the extraction methods to precisely identify the remaining pharmaceuticals plus their breakdown products through liquid chromatography coupled to mass spectrometry. Prior to this grant, these extracts were directly injected into a mass spectrometer, where sensitivity and quantification were poor.

We have coupled an Agilent HPLC (High Performance Liquid Chromatography) system to a Velos-Pro ion trap mass spectrometer to achieve better detection accuracy and sensitivity. HPLC is an instrumental technique that separates different chemicals in a mixture and typically measures concentrations of the outgoing chemicals using a detector (e.g. UV-Vis detector). With the combination of HPLC and ESI-MS (HPLC-ESI-MS), the samples are fed into the HPLC, separated, detected by the UV-Vis detector producing an HPLC chromatogram, then injected into the mass spec individually, producing a mass spectrum. This enhances the ability to collect far more accurate data, more easily determine breakdown products, and avoid damage to the mass spectrometer during repeated soil chemistry measurements. 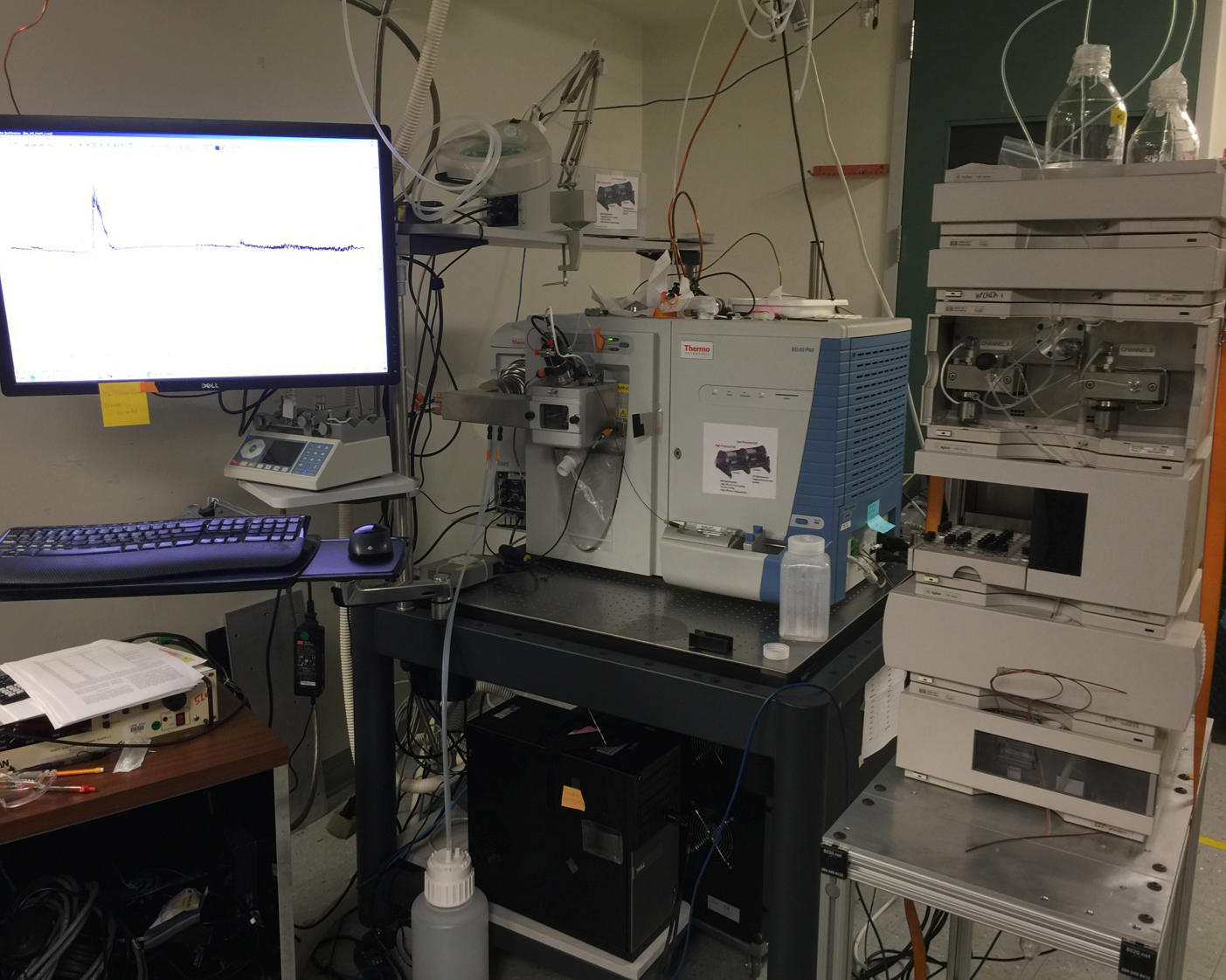 The photograph shows the HPLC detector on the right connected to the nano-electrospray ionization mass spectrometer (nano-ESI-MS). Up to 100 samples can be placed into the autoloader on the center-left of the HPLC pictured for batch processing. The sample extracted from the compost is separated by polar-charge into thousands of different groups of chemical compounds, simplifying the analysis at any one point. The nano-ESI-MS has extremely low sample consumption so molecular weight determination and structural investigation is possible for each of the thousands of subsamples. The entire collection of subsamples can be measured in a half hour. So far, we have increased our sensitivity of ibuprofen detection by many orders of magnitude.

Ibuprofen signals at various concentrations have been tested with the HPLC-ESI-MS system and correlated with the UV-VIS spectra. In the near future, samples from microbially active compost treatment will be subjected to a similar analysis and decay dynamics of Ibuprofen will be elucidated and correlated to bioassay measurements being conducted in the Andersen lab.

The addition of this new equipment for this project, thanks to this grant, provides the highest level of sensitivity for the detection of pharmaceutical compounds in complex environmental matrices. The combination of the existing unique microbial characterization facilities with this addition of the state-of-the-art chemical detection capabilities has made the Berkeley National Lab the most advanced research laboratory for the characterization of compost in the world at this time!”

More Andersen Lab research can be found at: https://ourenvironment.berkeley.edu/people/gary-andersen We’re committed to promoting natural abundance and composting. We’ve teamed up with experts including scientists, NGOs and agriculture specialists from around the world to share information on a platform to make it easy and commonplace. Matter of Trust is proud to be the fiscal sponsor for SONOMA Food Runners, which relays food throughout Sonoma County. This enables them to focus on building their organizational capacity before fully establishing their own non-profit status. The benefits of composting are well known, but what happens when pharmaceuticals enter the picture? Can material containing traces of pharmaceuticals – antibiotics in animal waste still be safely composted? The San Francisco  Urban Carbon Farming Project will take state-of-the-art science and protocol for measuring the carbon sequestration effects of utilizing compost as a soil amendment and from this, develop and deploy an experimental protocol suited uniquely to urban garden and urban park environments.

Heart of the City Farmers Market Matter of Trust is the fiscal sponsor of Heart of the City Farmers Market (HCFM).  Grants help to keep stall fees 50% lower than neighboring markets which in turn reduces food prices and makes it affordable for low-income customers. We are flushing perfectly good compost down the toilet – plus using drinkable fresh water to pump it through our sewers – when all this material could be feeding our soils, boosting photosynthesis and sequestering carbon from the air!

What can I do?

We are always evolving and welcome new ideas, partners, contributions and emails. We have a very optimistic view of the future. We are very fond of this lovely planet!

We strongly believe that,

“When you give, you get back tenfold.”

Our planet is buzzing with activity and good ideas.
This site is dedicated to everyone who is tuning in and adding what humanity can do for a healthy and harmonious future!
Check it now!
More projects